« Back to all Therapeutic product
« Previous product Next product »

Immuzac® is a Yunzhi & Lingzhi-derived standardized natural health product containing highly concentrated standardized immunostimulatory polysaccharides. Its ingredient is proven1 to be effective in strengthening one’s immune functions in defense against infection, thereby increasing one’s resistance to illnesses. Immuzac® is especially suitable for front line medical professionals, people who have frequent contacts with patients or those who are constantly exposed to an environment with contamination. The body’s immune cells would be stimulated spontaneously when being exposed to pathogens without overstressing the overall immune system and body functions unnecessarily. Immuzac® is a preventive health product to guard against diseases and to maintain vitality.

Immuzac® is the result of a joint research by The University of Hong Kong using an advanced proprietary research technology1.  Research experiments are conducted using molecular biotechnology to repeatedly test against efficacy and mechanistic pathways. Two sets of human cell are used in each round to investigate how Immuzac®’s ingredient increases the host resistance against infection.

Methodology: Human macrophages were cultured with different concentrations of Immuzac®’s main ingredient – PuB. The amount of secreted cytokines was assessed to determine the relative potency of direct stimulatory effects.

Objective: To investigate if Immuzac®’s main ingredient PuB has priming effect on human macrophages for the defense against pathogens. 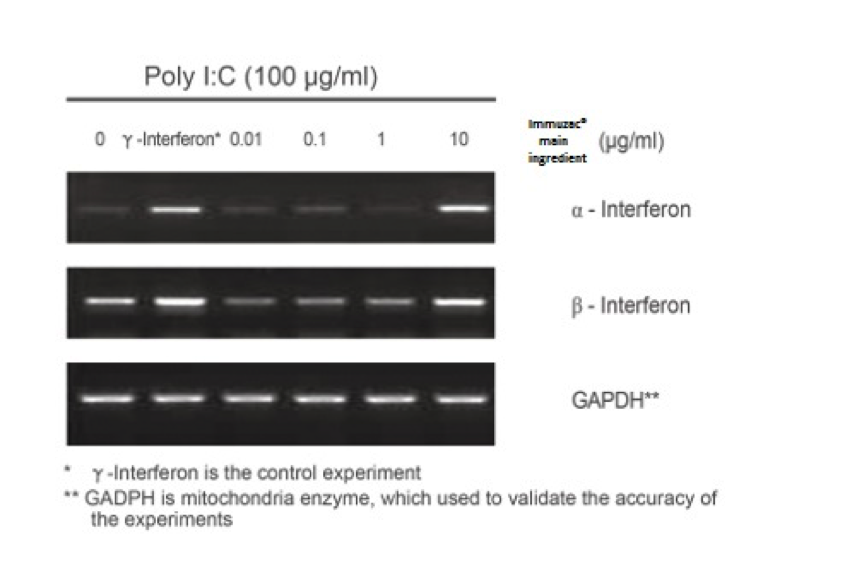 *γ-interferon was used as the control experiment

**GADPH is mitochondria enzyme, which was used to validate the accuracy of the experiments

From the research, it is demonstrated that Immuzac®’s main ingredient PuB can activate normal macrophages but will not further induce them to functional state without the contact of infectious agents.

Immuzac® prepares the human body to fight against invasion against infectious agents, yet it would not put the immune system under stress. It is suitable for front line medical professionals, people who have frequent contacts with patients or those who are constantly exposed to an environment with contamination.

Essence of Yunzhi and Lingzhi

The major active ingredient of Yunzhi is Yunzhi Polysaccharides. Recent scientific researches and clinical trials have proven that Yunzhi extract helps stimulate the immune system2,3. Lingzhi contains polysaccharides, triterpenoids, adenosine and trace elements, each having their own outstanding effects. Polysaccharides can improve the functions of the immune system. Triterpenoids may assist in stabilizing cholesterol and can protect the liver. Adenosine can inhibit platelet aggregation, thus maintaining good blood circulation. Trace elements, such as Germanium, can increase the oxygen carrying capacity of the blood, thus promoting metabolism.

Children under 12: one capsule, once daily
It is best taken in the morning before meal for better absorption

Keep in a cool and dry place. Avoid direct sunlight