It’s been around since 3000 BC, but traditional Chinese medicine is not only surviving—it’s thriving. Practitioners and manufacturers explain why and what the future holds.

“In the future, people will send photos of their tongue via WhatsApp,” says Lin Zhixiu. He’s not talking about the latest quirky internet craze or teenagers’ Snapchat habits. Lin is predicting how people will contact their doctors.

Lin is associate director of the school of Chinese medicine at the Chinese University of Hong Kong (CUHK), a department whose very existence may seem surprising in an era when medicine is so closely tied to technology that computers powered by artificial intelligence are diagnosing patients in Shanghai hospitals.

“Everyone from toddlers to 90-year-olds comes to our clinic for traditional medicine,” says Lin. “I also see a growing trend of young people opting for Chinese medicine, especially when they have things like a cold, cough, flu or pain such as back or neck pain.”

He’s not the only one. Rather than quietly closing shop as robots steal their jobs, traditional Chinese medicine (TCM) practitioners are arguing that there is a place for their ancient remedies in the 21st century—and they’re generating cutting-edge research to prove it.

In 2015, chemist Tu Youyou from the China Academy of Traditional Chinese Medicine won a Nobel Prize for deriving an anti-malaria drug from sweet wormwood. Other researchers have proved traditional remedies’ effectiveness at tackling everything from eczema to infertility, and for the first time this year the World Health Organisation has listed TCM in its annual global compendium that instructs doctors around the world.

This scientific backing is contributing to a global boom in TCM, which as an industry is estimated to be worth about US$60 billion a year and is growing 11 per cent annually.

“There’s been a big change in the image of traditional Chinese medicine,” says Viola Man-Chan, an executive director of PuraPharm, a major manufacturer of traditional medicines. “We’re disrupting the Chinese medicine industry by changing it from a very old-fashioned industry to something that is trendy, modern and accepted by the young generations. In modern life we can’t just rely on traditions; we need evidence-based science to understand how it works.”

PuraPharm operates its own laboratory, which collaborates with universities around the world. “We’ve been working with the University of Hong Kong faculty of medicine for, I think, 10 years now and we have identified a new active ingredient in one of the herbs,” Man-Chan says. “We’ve found that this herb has very powerful antiviral and anti-inflammatory effects, which is similar or comparable to the best-selling antiviral Western medicine.”

“Our research and development team is not focused on creating new drug formulas,” explains Vivian Tang, the company’s executive director. “Instead, we’re focusing on two aspects: how to measure and improve traditional formulas’ efficacy and how to translate century-old production methods and re-engineer it as modern-day mass production.”

Re-engineering traditional formulas is key to the industry’s newfound success with younger generations. For centuries, Chinese herbal medicine has relied on patients cooking their own medicine, normally by boiling herbs, sometimes for hours at a stretch. Many people now simply don’t have the time, so manufacturers are releasing their formulas as granules that dissolve quickly in boiling water.

At the CUHK clinic, Lin estimates that half the patients opt for granules. When it comes to Wai Yuen Tong’s customers, Tang believes the proportion is even higher. “Ninety-nine per cent of our younger clients will never spend an hour boiling raw traditional Chinese medicine themselves,” says Tang.

Refining recipes to pill or granule form has also made it easier for TCM to be dispensed in hospitals. “The way forward for traditional Chinese medicine for me is combining it with Western medicine. This could offer the best of both systems to the patient,” says Lin, who is also director of the Hong Kong Institute of Integrative Medicine.

One of the most successful examples of the disciplines being combined is in treating cancer patients.

“Cancer treatment—operations, chemotherapy and radiotherapy—causes serious side effects,” says Lin. “Patients may lose weight, they may lose their appetite, they may feel tired all the time. In these cases, we can give them herbal medicine to try and boost their immune system. Herbal medicine can also really help digestion and improve their energy levels. This is a very common practice in Mainland China and increasingly in Hong Kong.”

Despite these steps forward, the industry still commonly hits headlines not for scientific discoveries or its rapid modernisation, but for some unethical doctors’ continued and controversial use of animal products.

Ingredients such as rhino horn and pangolin scales have long been prized by TCM practitioners, which has decimated wild populations and driven these animals, among others, to the brink of extinction. The trade of these ingredients is now illegal in almost all countries, and academics are searching for alternatives to try to curb the black market trade.

“There are almost always substitutes, and I see a big trend towards plant-based medicine, especially with millennials, who care deeply about the environment and sustainability,” says Man-Chan. Feng Yibin, an associate professor at the University of Hong Kong, has found plant-based alternatives to bear bile, for example, and multiple herbal substitutes for rhino horn.

People who might choose to pop an aspirin before boiling a medicinal brew might find that TCM is finding its way into their lives in other ways.

Herbal, a cocktail bar in Beijing’s trendy Sanlitun district, serves drinks inspired by ancient remedies. Singaporean Jamie Koh, the founder of Brass Lion Distillery, the city’s only gin brand, scoured local TCM shops for ingredients when she was developing her infusion. LVMH is also betting on increasing interest in Chinese healthcare with Cha Ling, a skincare brand that combines traditional medical knowledge and the anti-ageing properties of pu’er tea.

In Shanghai, entrepreneurs Jen Hau and Polly Zhang are building a whole lifestyle brand inspired by Chinese medicine. The pair launched Jova Health in 2013 with three different blended juices, all of which were based on traditional medical recipes.

“Purify is a pear juice-based drink with rock sugar, to purify your lungs and your system; Replenish has a lot of iron and vitamins and is great for women having their period; and Nourish is a great substitute for milk drinks—it’s almond milk and almond is a big ingredient in traditional Chinese medicine,” says Hau.

As a millennial herself, Hau understands why TCM appeals to younger generations. “It is all about implementing things into your daily life to improve your health, and it’s all natural,” says Hau.

“As opposed to, ‘I don’t feel well so I’m going to take a painkiller.’ Or, ‘I don’t feel well so I’ll drink some cough syrup,’ and on and on. Those are very short-term solutions, while Chinese medicine is a very long-term way of conditioning your body to put you in better health.” And when you do need to see a doctor, the approach is very different. “Chinese medicine always looks for the root cause, and it’s a lot less invasive,” says Lin.

It’s so non-invasive that, in five years, when you feel a cold coming on, you might not even need to see a doctor. You’ll simply stick your tongue out and snap a photo from the comfort of your bed.

“In Chinese medicine, we always look at the tongue. It says a lot about your health,” says Lin. “If the patient WhatsApps a photo of their tongue and leaves a message about symptoms, the doctor can make a diagnosis and write a prescription. I think that will become more and more popular in the future.” 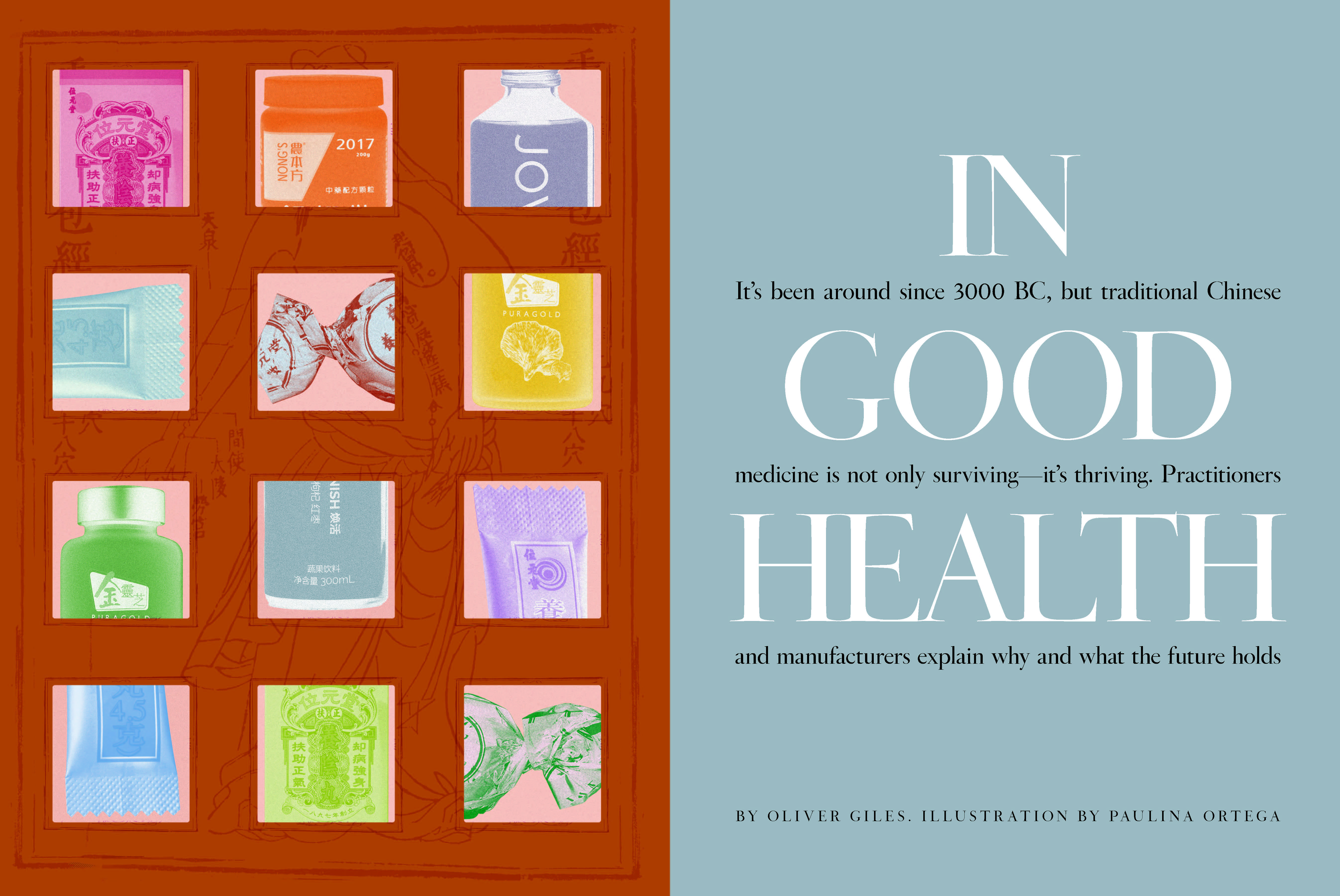 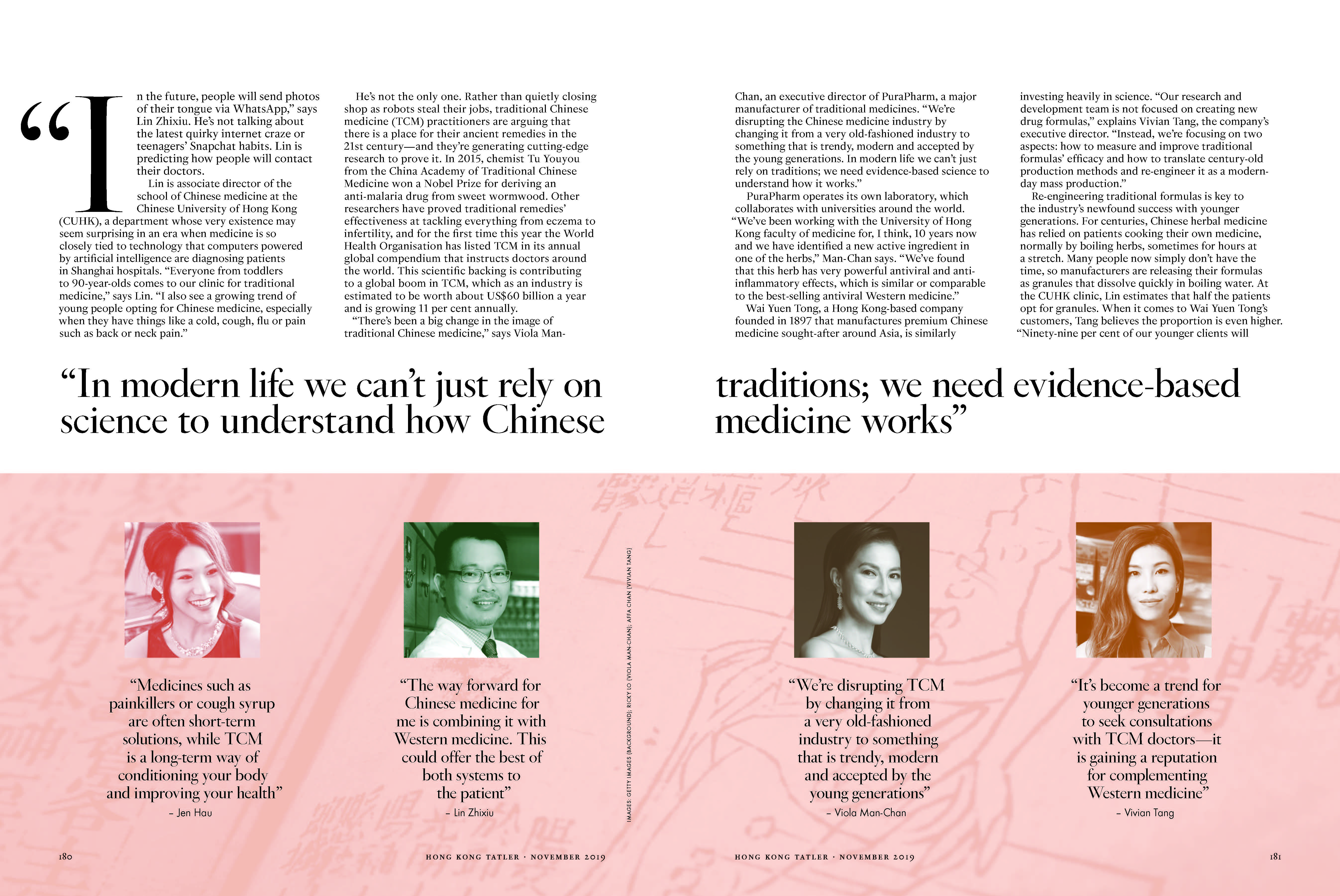 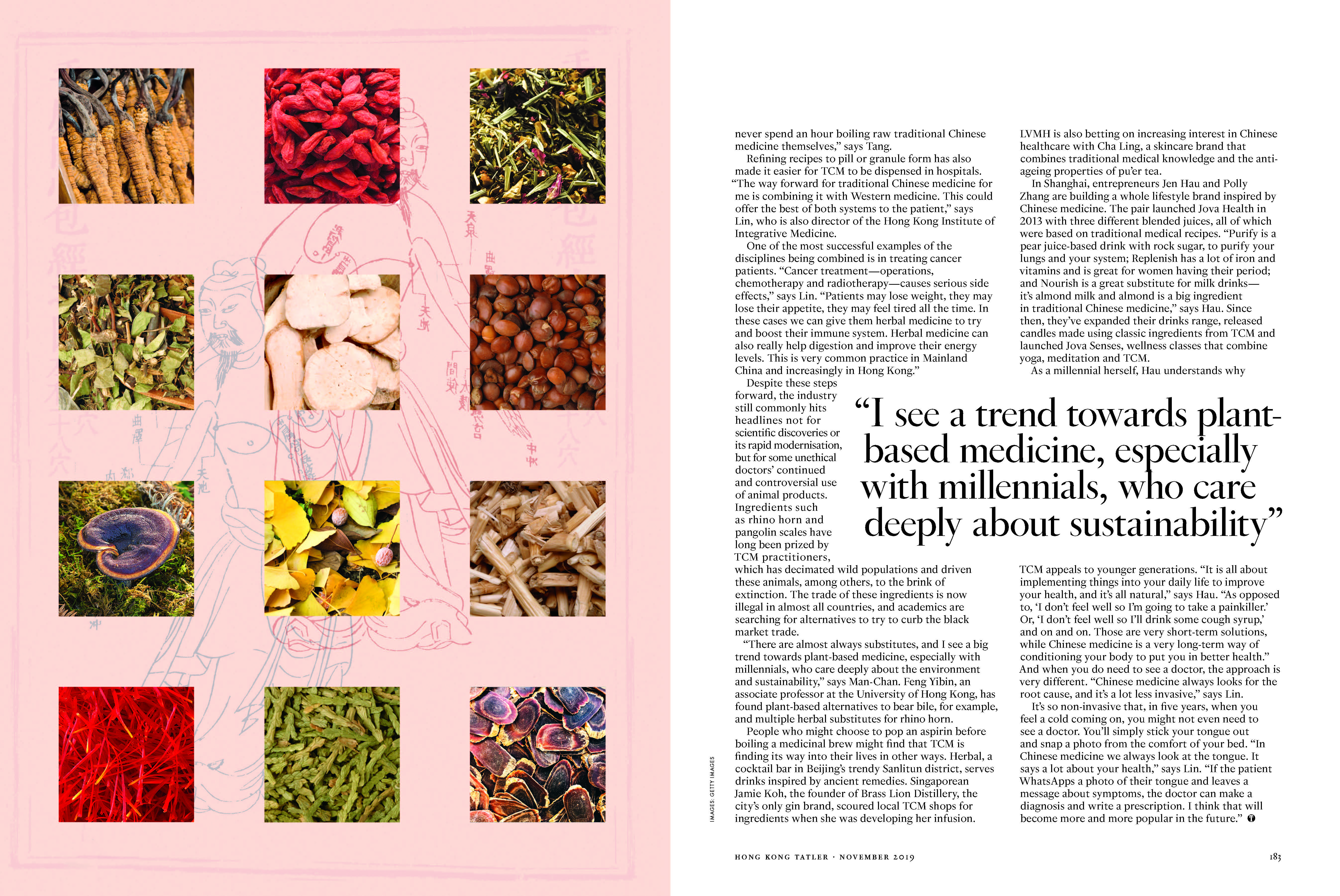 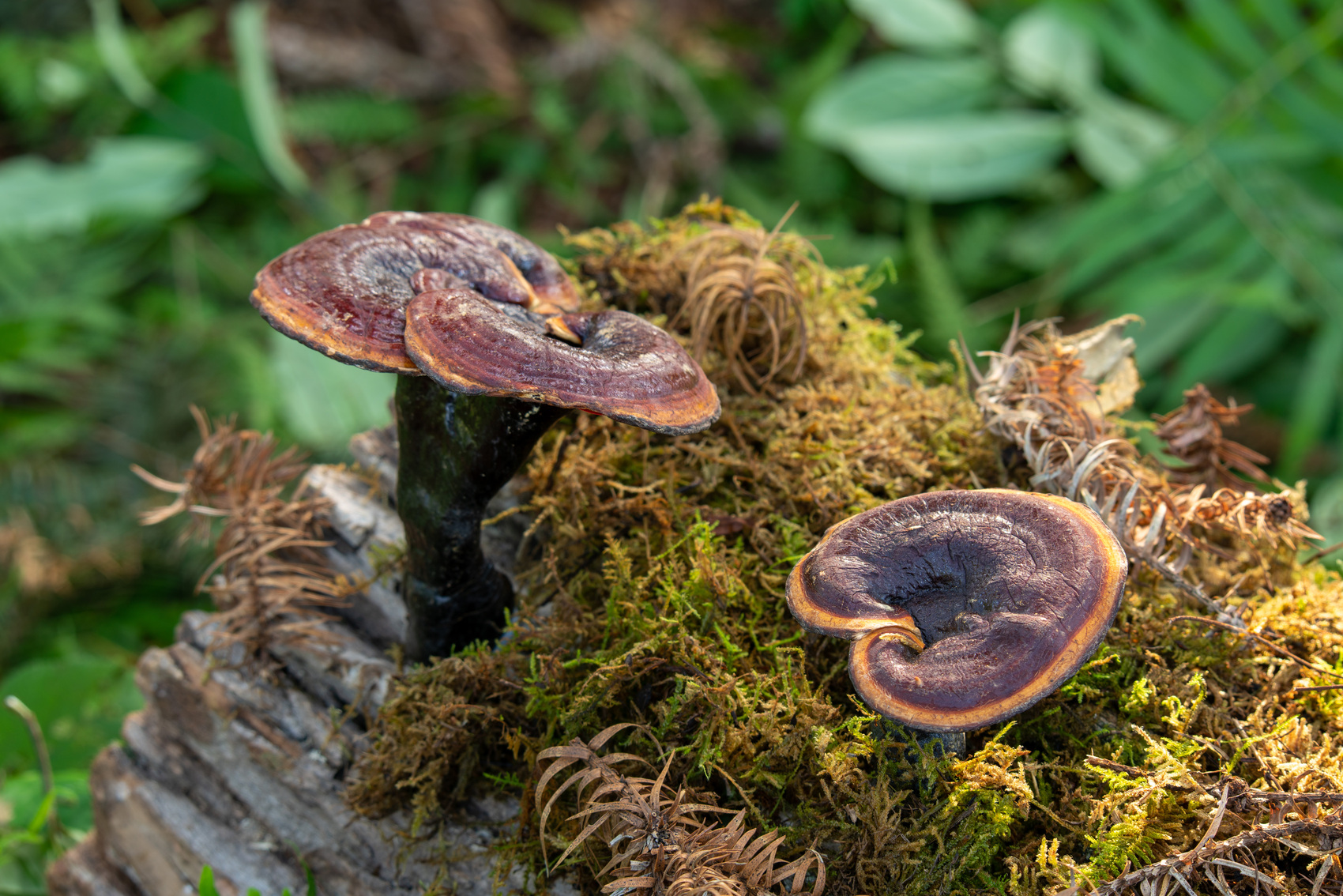 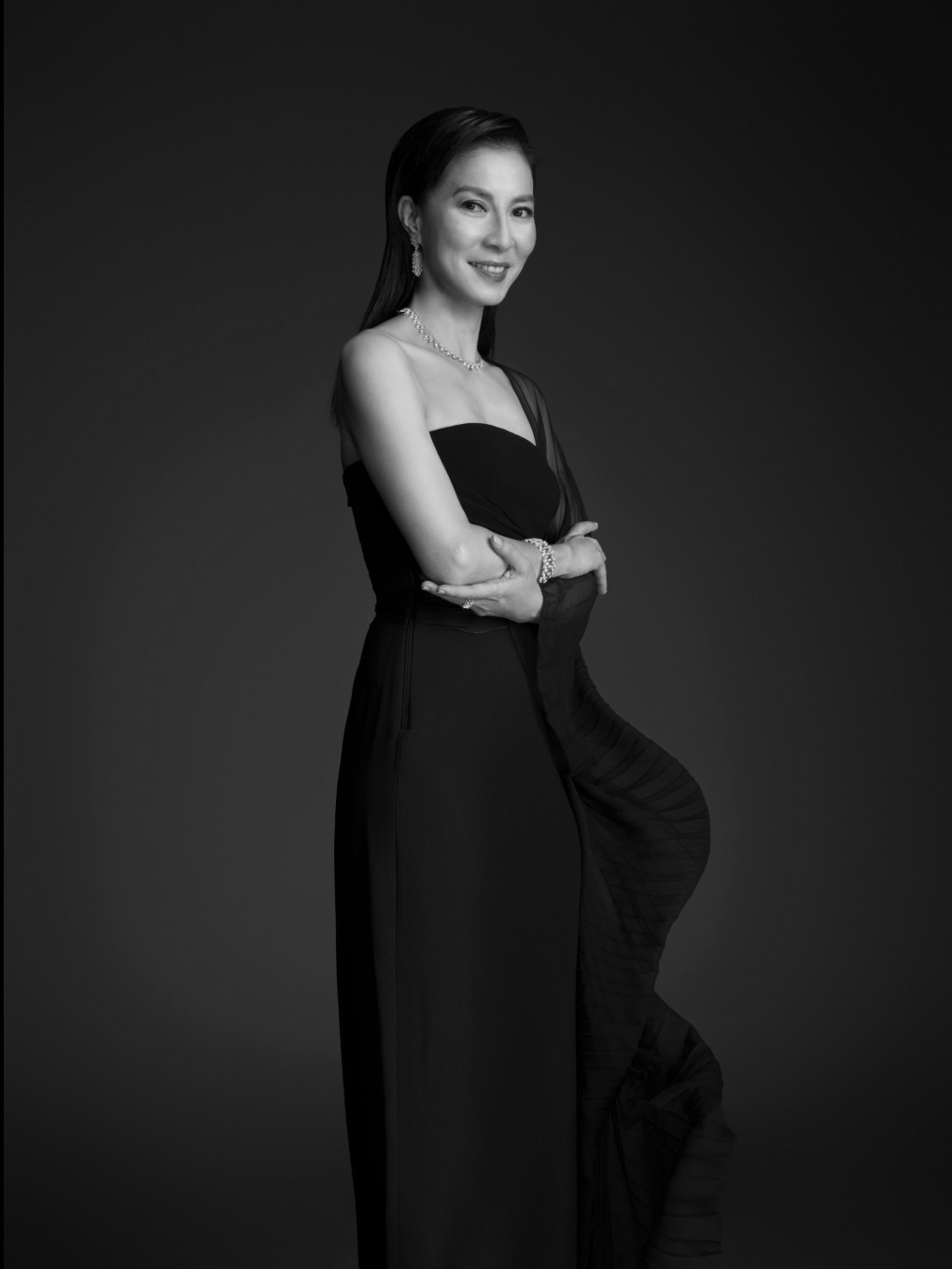 « Back to all Press Releases
« Previous news Next news »